Berlin’s urban districts differ in terms of their social structure and infrastructure, their population composition and density, in terms of the proportions of residential, commercial and green spaces, in their transport routes, the tourist attractions found there, their political composition, the influence of volunteers and people engaged in local activism, and in many other respects.

These characteristics interact and also affect the number and composition of incidents recorded by the Register Offices in each district. Population density is different in peripheral and inner-city districts. The more sparsely populated an area is, the fewer incidents will be reported, while if more people frequent a place, incidents will be noticed more often and reported to the Register Offices. This is particularly true for local centres. However, a higher number of incidents is also recorded for public transport hubs. These are locations where many people come into contact on their way home from work, a demonstration or a party.

As a result, many opportunities arise for threats, insults and attacks committed by people with hate-filled attitudes who are prepared to use violence. This phenomenon is particularly noticeable in Mitte, Friedrichshain-Kreuzberg and North Neukölln. These districts or sub-districts within them are at the top of the statistical league table for the number of attacks. This is not solely due to an organised right-wing scene; the incidents recorded are predominantly occasional acts such as racist and anti-LGBTIQ* insults and attacks committed by opportunistic perpetrators. In order to track down the organised far right in Berlin, it is crucial to examine propaganda incidents, public events, threats directed at political opponents and damage to property. In these categories, the figures for the sub-districts of Niederschöneweide, Rudow, Buch and Karow are striking, as well as for Steglitz and Zehlendorf.

Last but not least, a committed democratic civil society is an important prerequisite when it comes to reporting incidents. After all, incidents are only reported if they are perceived as disturbing and if people are aware of the Register Offices’ work. Local networks that are interested in the issues of racism, anti-Semitism, anti-LGBTIQ* prejudice or the far right and are active in combating such phenomena report incidents to the Register Offices much more frequently than networks that deal with other issues.

Areas in which there are no engaged individuals or local initiatives are blank spots on the map for the Register Offices. These regions include residential estates with detached or semi-detached houses, as well as sparsely populated outlying areas with forests and lakes. These contexts should be borne in mind when interpreting Register Office data. 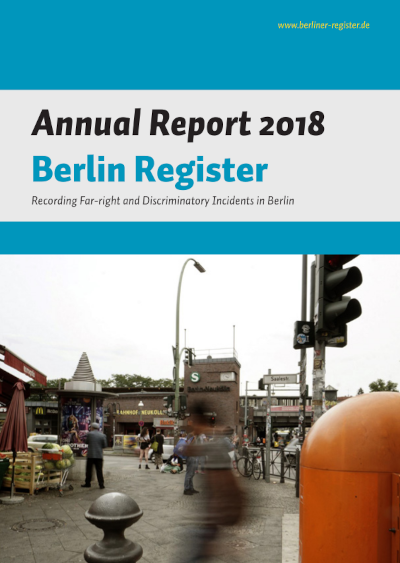